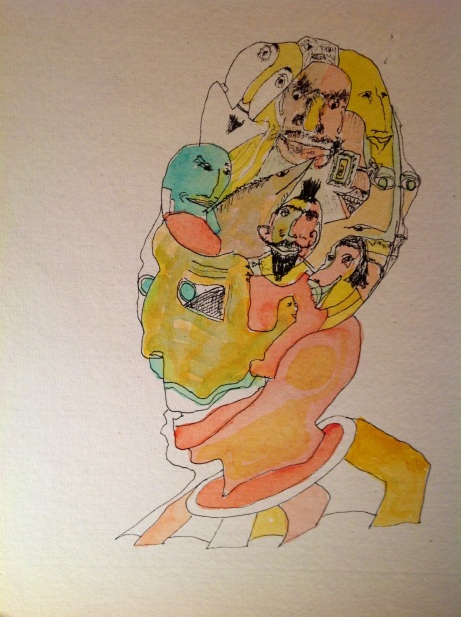 We’re here in Panjim almost one full week now. Scott was so energized by the new location he completed six paintings the first day we got here! It’s been an up ‘n’ down week in many respects…including a blackout episode on Wednesday in which Scott was literally down ( on the floor) during a wheelchair transfer. We lucked out bigtime with it being a relatively gentle landing partially on a thick carpet. No bones broken and no external bruises. The hotel sent me 6 strong young men when I only requested 2. They helped me get our ramblin’ man back in his comfortable bed very efficiently. Lots of rest followed. His two doctors have been able to visit us easily here. We’re happy about that.

We are also looking forward to watching the Grammy Awards. I used to live in an artists loft a block away from the Staples Center on 11th and Pico in LA…they’d close off my street so the limos could glide downtown to the event. One time Scott and I and Big Loolie watched from my doorstep as the spotlights arced overhead. That was the same year we walked all over downtown with Indian turbans on to celebrate Scott’s birthday.

This latest painting of Scott’s is a faces-within-a-face piece of which he’s done several over the years. It’s almost as if the faces form a colorful turban atop someone’s head. Or it’s a glimpse of what’s inside the artist’s head. It could represent the characters contained in a writer’s head, also. I’ve always loved the illustrative quality of some of Scott’s work…very much in the style of The New Yorker, for example.