Each of our lives follows a trajectory that overlaps and parallels and intersects with several other individuals over a lifetime. We may cross paths only once. Or it might be that we walk side-by-side with someone for a good chunk of time and then never see each other again. Sometimes we maintain friendships over the course of a lifetime only checking in with each other once in a blue moon but it feels like we just left the conversation yesterday.

We often get too caught up in the minutiae of our daily grind to examine the synchromystic patterns in these relationships. I learned to pay attention to synchronicity on a day-to-day basis. Doing so has added another layer of meaning to life’s mystery and given me a sense of wonder.

I came across this notation that Scott made in one of the several books he collected about Buckminster Fuller. Scott wrote this in the book “Inventions: the patented works of R. Buckminster Fuller” in the summer before we got the bad news.To find out more about the unusual synchronicity between “Bucky” & Scotty click here. 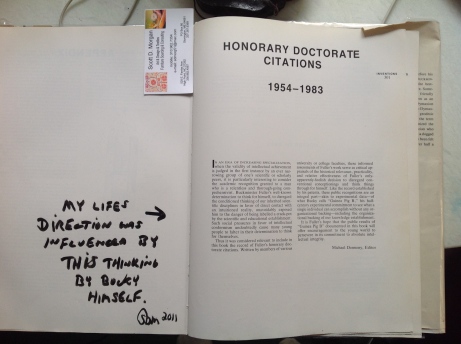 Scott was often misunderstood. Sometimes diminished or scoffed at by those who may have perceived his wild and fearless individualism as a threat to their own status quo. He could not be contained. His thought process was non-linear. How wonderful that Scott’s life was influenced by a course he took with Bucky at Southern Illinois University at Carbondale and then 3 decades later without foreknowledge Scott decided to live on the same island in Maine where Prof. Fuller also had lived. We lived on Deer Isle for 2 years before realizing this surreal fact. Bucky gave Scott’s life a “Fuller” meaning.

3 thoughts on “a fuller meaning to life”