My best memory of my cousin Scott comes from his Birthday celebrations in Alhambra Spain, I was 13 and my brother 9. He had invited our family over to celebrate and my parents were able to bring myself and my brother Finlay along. As we drove up from Malaga my brother and I were excited to see what the big deal about the Alhambra was.

We got in and checked into our hotel, we had some time to kill as a family and so we wandered around the free access areas. At some point in the afternoon we met Scott and the usual pleasantries were exchanged and we set off on a walk. It was agreed Finlay and I were to explore with Scott and we’d meet my parents later

Scott being Scott had no intention of letting the afternoon go to waste and decided we should sneak into the off-limits-paid access area of the beautiful Alhambra palace. He told us to run ahead as kids do and had us pose for photographs. Using this method we were able to infiltrate the palace grounds. We felt like secret agents! We made our way through the grounds accompanied of course with a great commentary from Scott – we had the sneek preview of the beauty of the palace and all the historical facts to go along with it. I remember very well the amazing tiling and rooms with the rooms above for the concubines.

I really have to credit my cousin Scott with partially instilling in me that sense of adventure and risk taking – it’s something I’ve taken with me that has seen me infiltrate building sites, climb 20 story cranes, gate crash wedding receptions, bluff my way into conventions and so on. 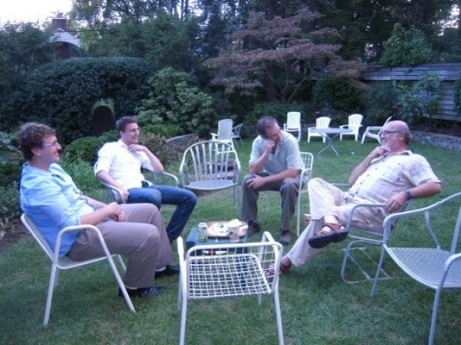 One thought on “at the alhambra…”