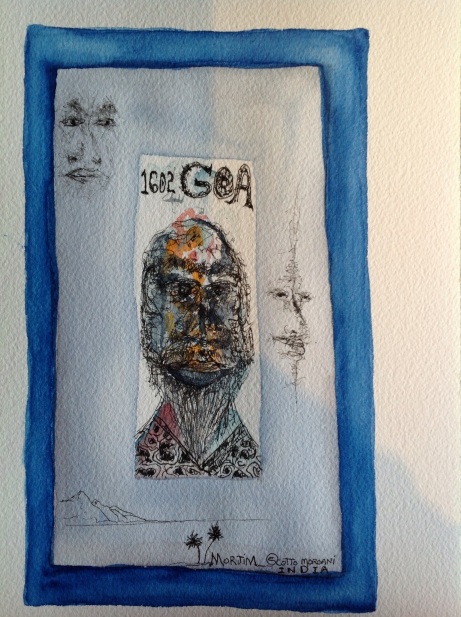 When we woke up this morning we were in a large comfortable space with two of everything: two beds, two tv’s, two bathrooms, two desks, and one kitchenette. The confluence where river meets sea is right outside our room a few yards away. Whitecapped waves crest out in the middle of the water and the far shoreline ( which is actually not that far) features a colonial Portuguese fort directly across from our new digs in Panjim. Scott can gaze out from bed through floor to ceiling glass windows to view seabirds swooping down to catch a feast, fishing vessels that conjure memories of Stonington lobster boats, people strolling the walkway along the waterfront, and after dark the twinkling lights along the shore, the stars, and the garishly lit party boats.

Scott’s two doctors are based in Panjim less than ten minutes from where we are now. As Scott’s mobility has declined and his needs have changed, both doctors agreed that the move would be beneficial to all of us. Last week while taking a caregivers holiday at the Marriott I scouted out the rooms there and tested the environment for suitability and comfort and the Marriott passed the test. 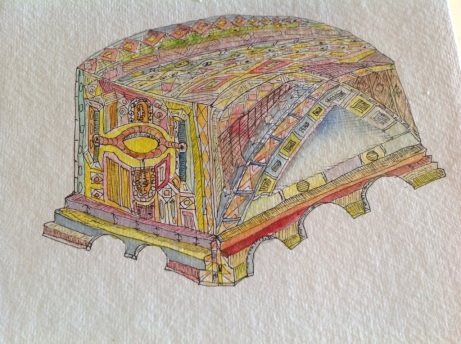 Scott ( and Scotto) had already completed several new watercolor paintings by the time I woke up. His prolific output of quality work has me simultaneously intimidated and inspired. I set up the dining table as my own designated studio and hope to finally catch my elusive muse here.

But first things first. This being the new home of two visual artists, my priority was to decorate our love shack with colorful local textiles that we’ve acquired. Beribboned bed quilts, crazy fabric lanterns, emroidered bits and pieces, as well as beach sarongs now adorn our Panjim Palace making a feast for the eyes like every home we have shared. Then I ventured forth to the breakfast buffet and see what I could find that might delight my Prince of Goa. I came back to my guy with the loot I had scored: fancy chocolates ( he’s under doctor’s orders to eat it), a rainbow lollipop with a cartoon bear image on the wrapper, a chocolate covered Haagen Dazs ice cream bar on a stick, and a Time magazine.

7 thoughts on “our panjim palace”