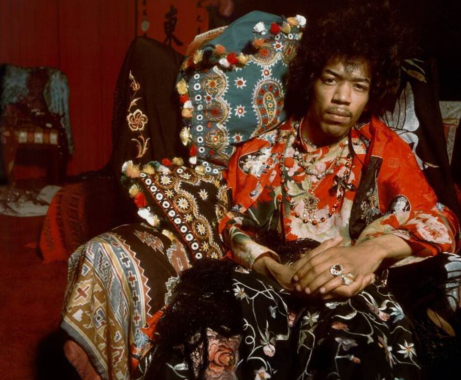 photo of jimi hendrix from thegirlskeepcomingtothecanyon

Scott came of age in the 60’s and Jimi Hendrix was his all time fave as much for his personal fashion esthetic as well as his music. I could easily imagine this photo with Scott’s face among the exotic embroideries and silks.

This weekend I watched the controversial John Ridley biopic Jimi: All is By My Side which falsely depicts Jimi as a batterer and somewhat dimwitted loser.His former girlfriend Kathy Etchingham is thinking of suing the filmmakers over this lie but I think maybe the greater tragedy is how poorly done this film is. Which is surprising considering that Ridley directed the intense Oscar winning film 12 Years a Slave.

Because Ridley could not acquire the music rights, there is not even one shred of Jimi’s original music in the film, only covers he did (the most electrifying being “Killing Floor” in a scene where he blows Eric Clapton literally right off the stage and “Sgt. Pepper’s Lonely Hearts Club Band” that he learned 10 minutes before performing with two Beatles in the audience). Click the “Killing Floor” link to watch the actual performance not the John Ridley movie version. Don’t bother watching Jimi: All is By My Side unless you want to see Outkast’s Andree 3000 make a fool of himself in his performance of the genius Jimi Hendrix.

One thought on “all is by my side is a lie”