Yesterday I played hooky. It was The Scott Thing To Do. After the previous day’s attention to hanging up all my open for business signage I deserved a break (and so did my two fur-kids). It was Bastille Day and after all I am at least one quarter French and have cousins in Alsace. 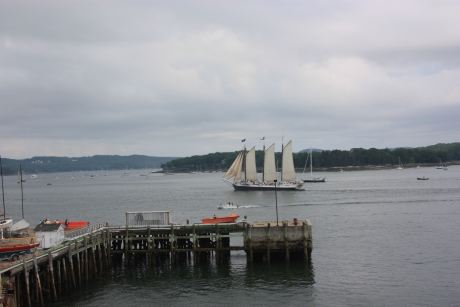 The big news on the east coast this month is the Atlantic crossing by the French tall ship Hermione. She’s been making her way north from Virginia on up to Boston and yesterday to historic Castine, Maine on Bastille Day. I could not miss this event so I headed down early and was rewarded with a prime parking spot on the street only two blocks away from the harbor. It was bright sunshine when we got there but soon a dense fog rolled in and just as quickly rolled back out, leaving some dark clouds in its wake. 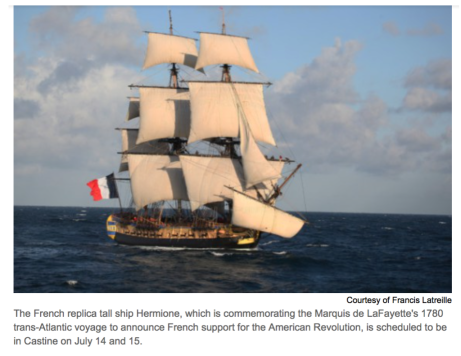 Hermione was escorted yesterday by a select group of schooners from the Camden-Rockland windjammers. Seen above in the top photo is the beautiful Victory Chimes which lead the procession.

The American Eagle schooner sailed into Castine soon after. Castine welcomed the ships with a cannon salute as they entered the waters off Dyce’s Head Light and slowly sailed in to Castine’s safe harbor. Hershey was not keen on the cannons but even so he and Loolie were such well behaved dogs that several in the crowd of onlookers made special mention of it. A woman even went off to fetch them some water so I could continue to hold my excellent viewing spot. We had already been standing in this spot for 3 hours by the time the Hermione arrived. She is a magnificent ship! The only disappointment were her sheets were down and she was under the guidance of tugboats.

I plan to do some new schooner paintings this year. Here’s one of my earlier pieces that is still available. It is mixed media on a 36″ square canvas.

As soon as I got my pics I grabbed my gear and my tired pupkies and got out of Castine before the crowds. On the drive back home I pondered my own ship coming in. Is the Good Ship Katy Allgeyer under full sail now or am I still needing assistance from well meaning tug boats? Methinks the goal is to be seaworthy and to fly at full sailing speed as often as opportunity presents.