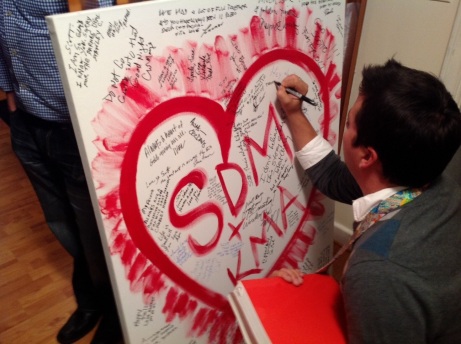 After a year and a half of bi-coastal dating, Scott asked me to move east to be with him. I thought it over and these two dream visions clinched it for me. On December 23, 2006 two days before Christmas, Scott and I bought a house together in High Point, NC. When we moved in mid-February he had some concrete poured out curbside, drew a heart in it with a stick, and wrote SDM + KMA inside the heart.

That’s the same image I used on a big canvas I prepared for Scott’s going away party in High Point that was held during the international furniture market week. My intention was to have all the guests at the party sign the canvas for Scott, like people do with a plaster cast leg injury. We probably didn’t catch everyone’s signature but we did fill up the canvas with Scott’s many colleagues and friends’ good vibes. And that’s good feng shui.