If you were at the Celebration of Life for Scott you may have already read this wonderful and highly personal essay remembering Scott. It is written by Alison Morgan who is the daughter of Scott & Lindy & Robert’s godfather, Dick Morgan. Scott always felt close to his “Uncle” Dick (they were not blood relations despite the common last name). Lindy and the rest of us were all amazed that Ali “GOT SCOTT to a TEE”. We’d like to share it with you now along with this art work created for Scott by his brother Robert. 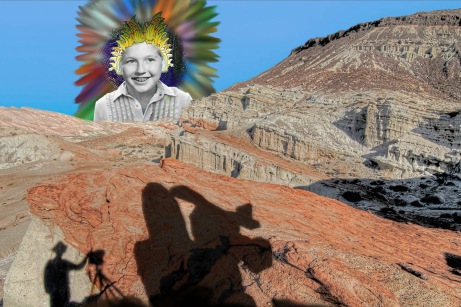 My divorced parents were each the first calls for his divorced parents, when Scottie finally passed.
We all knew it was coming…well, if Western doctors know anything. He was told 3 months…tops. It was 11. But it still took his aged, and somewhat remote parents by shock. Daddy told me that Jerry could barely speak on the phone. Since Dad can barely hear, that was probably one fun conversation. Scottie would’ve laughed.
The Morgan connections were deep. Jerry and Daddy had been college, or post college roommates. Like many post war American Jews, Jerry had changed his Jewish surname to a more gentile sounding name. He chose his roomie’s name, and Scott, a decade my senior, was a distant big brother in my youth. Jerry told me, when I saw him during Scottie’s S. CA pre-India stopover, that he and Dad used to babysit my older first cousin. That was news to me.
Pictures of Jerry and Ginny, Jan and Richard defined the horseplay, Mad Men style of their young marriages. Lots of costume parties. I recently found a great black and white shot of all 4 dressed in suits. Very Brat Pack.

Ginny and Jerry parted ways long before Jan and Dick, and the women stayed close always. Jerry was one of Dad’s few friends from his early years with whom he never lost contact, even as they chose very different paths over the years.
I decided to call Jerry that night in Rancho somewhere…one of those desert golfing communities. He was definitely talking, and in the most loving, candid way I’d ever heard him about Scott. “ I think I was jealous of him”. Wow, Jerry. You said it. And how filled with love you were. My heart nearly broke knowing how hard it was for you to express that love in your time together.
Those two were oil and water their whole lives. For some reason Scott chose to go into Jerry’s business, Furniture, so their lifelong head-butting took place internationally, as they went from showroom to showroom across the world. Jerry and Dad recounted the same story to me, on the day of Scott’s passing: “Scottie put his arm around my waist when we walked to the door, that last night in Santa Monica before he left for India. “Dad, don’t grieve for me. I’ve led the most wonderful life; it couldn’t have been any better. Please, don’t grieve.”
At some point, maybe 30 or so years ago, Scottie and Dad developed their own friendship. Perhaps born out of Dad’s apt in NY being a perfect pitstop for Scott whenever he came barreling through – hey Richard, I’ll be In NY tomorrow…is the guest room free? Perhaps born out of the disconnect with his own father. With my older brother long gone from NY, and no desire to do the museums with Dad on hated trips into a city that he had happily left behind, Scottie became more and more a fixture in Dad (and my step mother’s life). And a surrogate son, both boys with the middle name David.

Scottie was a collector, picking up stuff wherever he found himself: walking sticks, textiles, neckties, poker chips, eyeglasses, paintings, musical instruments, mentors, wives, friends. Many other things too. And with that eye he had for what was somehow special and unique, he also shared his visions as a painter, poet and singer, no more prolifically than in that last chapter of his life.
“I didn’t ever think he was crazy”, Dad said after Scottie passed. “Oh yes you did”, said I. Remember the speed with which he walked through a museum? Told a story? Travelled the world? Pissed away money? Chuckle chuckle. No comment. Quirky didn’t begin to cover it.
I, truthfully, didn’t begin to really get Scottie until this part of his life: his dying. He had almost died the first time cancer appeared, maybe 5 years ago. He didn’t have health care, things were a mess. Dad and Alicia visited him in High Point..or was that Maine? He was so sick. They didn’t think he’d make it. But he did.
The second time was different. Inoperable. Stage 4 or 5. Just a matter of time.
Going to Goa. That was the sign on the hotel door in Santa Monica. That was the name of Katy’s blog all these months. I’d never even heard of Goa. I’m sure I wasn’t alone. He met us at the hotel door in a kimono and some kind of head wear. Then he plopped it all on my 10 year old daughter, Zora, and gave her a tie and poker chip. His West Coast family was sitting around, smiling uncomfortably. I started grinning from ear to ear.
Scotty wanted to die in India, where he had lived and travelled a few different times. Where he believed the medical care would be humane, and not eat away every last penny he had. Or didn’t have. Where the spiritual philosophies matched his own. Where he believed he would be embraced, not shunned, as he died. Where he could watch the sun rise and set over the beach, tune out the pain without the static of his life in the States. And let his true love Katy and he hold onto their partnership at a time when medicines, tubes, bright lights and doctors are generally the line in the sand to romance being comfort and healing.
He was right…on every count and more.
Though some of his friends and family did make the trek to Goa over the course of those 11 months, most of his people experienced him through his paintings, writing in Scott’s own Scotto language, youtube and Katy’s beautiful blog and photos.
As deep as the ties were with our families, I didn’t know Scottie in living as I did in dying. While we did have some overlap when he lived in Santa Monica with his second wife, our living on different sides of the LA divide (me East, he West) was enough to keep us apart. His jittery, jumbly energy and short attention span, combined with non stop chatter, was off-putting. Still, I did think of him as family, and I was always drawn in by his artwork and the collections. I was so proud for him when LACMA put his textiles on exhibit; how beautiful they all were.
Katy had bound collections of his paintings before the India trip, and he had given away much of his work to friends as he prepared for this final journey. But the paintings in Goa reflected the emotional and thoughtful process of a dying man: rich, color soaked images of all parts of his life, and a heightened experience of the now: from his hotel room, from his wheel chair, from his drug addled mind, from his heart. I know that all who saw the work were lifted by it, inspired by his visions and colors, amazed at the volume of output as his body and capabilities steadily diminished.
Katy. She stayed by his side, demonstrating love in a way that poets have written since time immemorial. She shared this intimate blog of their daily life as he lived with life threatening illness, not as he died. We readers cried with her as she shared their continued sense of wonder with daily life, the local scene and continual unexpected generosity from so many different people…all through the lens of Scottie’s challenges. Sometime she shared the rough stuff; not often. And so many “coincidental” occurrences were related to us over the months. I know we all thought…coincidence? Nah…Scottie.
And the paintings and writings, filled with color and life. We were inside that head, that was close to exploding with all the pain relievers he was popping. The sixties all there in one guy. Somehow, some non profits got started, some students in the States adopted him, all kinds of people fell in love with him.
Including me. And his Dad. And no doubt his mom’s love got renewed…dear Ginny also was living much of the time on a different planet than her son, as most of us were, but I suspect neither of his folks knew what to make of this creative, impulsive, one of a kind child they had birthed. But in his dying, there was only love. That is clear.
As my dad said, Scott marched to his own drummer. Deed he did. I’m still trying to connect the symbolism of Scott dying on 9/11, and really see it as a global healing moment…though don’t ask me how to rationally explain. It just was.
And he just was. Scottie. Scotto. XXXOOO. lov. tu. you. Rest in Peace, dear brother. Rest in Peace.
With love,
ali
Postscript: Right after I wrote this, Zora invited me to come out to our courtyard and paint. Huh? We never do that. But Scott was channeling, and we both got all cozy with color, light and nature. Thank you, that was fun.

5 thoughts on “a remembrance”