Our psych counselor in India told me recently that Scott had struggled with feelings of guilt because he thought he and his terminal disease and his decision to go to Goa for his end days was keeping me from making art. I’m not surprised by that. The guilt had to be released somehow and so Scott would put pressure on me to paint. If he could do it so could I, right? I finally made an attempt. After we’d settled in for a month already at ‘Hotel California‘, with Sherlock Holmes as my muse I ventured out for the nearly two hour drive over bumpy winding roads to Panjim. After many false leads in the sweltering heat, I located the only good art supply store in Goa and bought a dozen canvases, some paint, and some brushes. They sat in our hotel room staring at me for a couple of weeks while Scott’s refrain of Why don’t you paint? wore me down. Finally,  I primed them and prepared the stretched canvases with my signature underlay only to find that nothing would come out of me.

Nobody had primed and prepared ME. I couldn’t cry in front of Scott. I couldn’t scream in front of Scott. I had to maintain composure in order to keep him going, to not add to his burden which would only heighten his physical pain. I was in a remote area of an exotic country known for nothing going as planned or on time; I was watching the man I planned to spend the rest of my life with suffering from the pain and ravages of cancer, wasting away to the bone; I was managing all his many care needs; I was taking care of household business back home; I was desperately trying to cope with daily losses as the big final loss loomed over every hour and every day for nearly one entire year. The enormity of the situation can’t be summed up in one paragraph, so I won’t. I tried repeatedly day after day and week after week. Eventually I gave up getting any painting done while we were in Goa. I focused my creative energy on writing this blog and helping Scott fulfill his lifelong dream to be a recognized artist.

I feel the full story wants to be a book and I will make it so. But first, I need to paint. I have begun again. After two years of not painting I discovered that my paints are thick and sluggish (much like I have become in the aftermath of grieving). Some of the tubes are completely dried up. I feel my technical skills–if not my talent and creative drive–have abandoned me. The skills and lessons learned over years of daily painting are now a struggle to summon from heart to brain to hands to brush. Scott painted nearly every day we were together and created more than 200 paintings while the debilitating disease made it increasingly hard for him in every way. That inspires and intimidates simultaneously. Bravery is part of the artist’s toolbox. You have to have courage to face the blankness and fill it up. It helps if you don’t let yourself be influenced by the judgement of others. It also helps to believe in yourself. If you have someone else that believes in you and also believes in your art that is a luxury. Scott and I both benefited from our mutual support of each other. He was my biggest fan and I his. In that sense we were extremely lucky to have had that luxury. 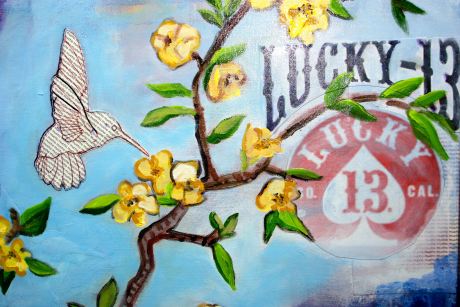 Scott’s professional career as an artist began and ended in that final year in Goa. My professional career as an artist was suspended that year and is now beginning again as I find my way back from Goa.  Last September on the day after Scott’s memorial party in Maine, I accepted a painting commission from clients in Los Angeles who had tracked me down and knew the type of large work I did prior to meeting Scott. They asked me to create a wedding gift painting chock full of personal and specific symbols with feng shui power for a newlywed young couple that was very dear to them. I accepted this commission with trepidation for the obvious reasons and the not-so-obvious: creating a heartfelt piece for a couple just beginning their journey while grieving for the loss of the love of my life seemed like a challenge I might not succeed at. Five months later, here it is.

(Click the image to see it larger size…it’s actually deep purple not black.)