Some of the reason that the fence always looked so ramshackle was conceptually it was the Robinson Crusoe aesthetic that Scott fancied for this old farm. After 11 winters of strong winds that can sometimes get as high as 70mph the fence took a beating that it could not win. It finally collapsed entirely on the back end last summer. Things being what they are on Deer Isle, it took me until now to secure a knowledgable handyman who could schedule time to secure my fences. The crew is working on that now. And in keeping with our wabi-sabi concept, we are using pre-aged remnants from the original fence to rebuild it.

Last year the fence was on its last legs. Hershey was, too, but I did not know then that it was to be his last full summer in Maine.

I’m going to remove the old tarps from the studio and have a new roof put on, too.It remains to be seen if a minor facelift may convince some city slicker types a.k.a. People From Away that there might actually be some worthwhile art for them to see inside the dumpy old shed known as my Art By Katy studio gallery. Every year a few cars slowly do a drive by and turn around without stopping and this year has been no exception. Scott would say it’s their loss and if they don’t have the imagination or sense of adventure to see beyond the veil of illusion then they wouldn’t get my artistic vision anyway.

You need faith and imagination to believe that inside this gallery there is something worth seeing. Art By Katy is getting a new studio roof next week. Of course the next step will be to paint (the front of the studio, at least!).

Sometimes, even *I* don’t get my artistic vision.

That has been the case for 3 summers now. I’m smart enough to know when I need to pull away from the easel and start putting some life experiences into the creativity bank. Inspiration will come when it wants to come.
Meanwhile, I have fences to mend. 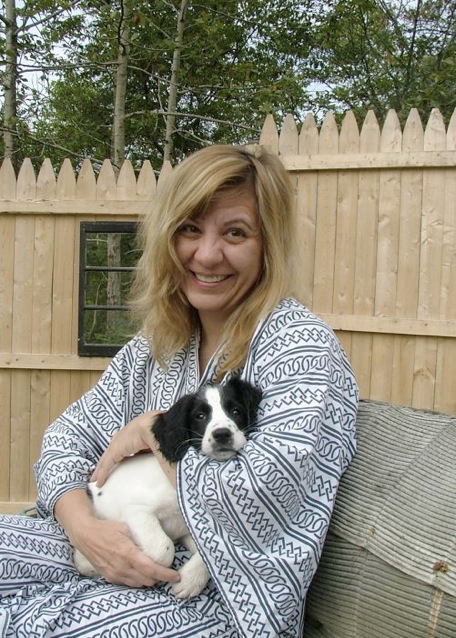 A photo I discovered today of me and Loolie. The fences were new. And so was Loolie. Ten years have passed only to find out that Loolie and I are new again, too.

One thought on “mending fences”