“My Kind! ”  serendipitous discovery on a backroad of Vermont when Loolie was a puppy.

I’ve struggled to put down words to describe Loolie’s last day on The Mothership. It seemed divinely guided and, I believe, Loolie directed me in everything that happened that day. Even in this, she thought she was the alpha. Let me take you on the day’s journey as best I can if you dare to challenge your own beliefs. Otherwise, enjoy some favorite images of the best little girl in the whole wide world, her name was Loolie… Loolie. 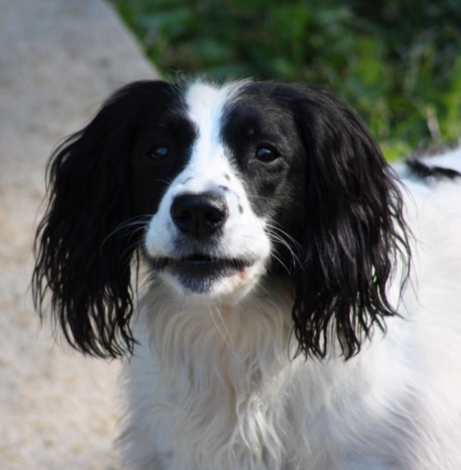 Always waiting for the ball to be thrown her way.

Since September, when Loolie had suffered an attack of vestibular disease which left her with a permanent head tilt, lack of balance, and hearing loss, we’d had to adjust our daily routine. We both adapted and became more in tune with each other. I switched to hand commands and gave her a thumb’s up to mean “Good girl!” which she seemed to understand from the first time I used it. I’d gotten into the habit the past few weeks of connecting with Loolie telepathically. I would ask her “Are you still having fun here or are you ready to go ?” and I’d sit quietly until I could “hear” her response in my mind’s eye. For weeks her answer had been a simple “Not yet.” and I’d know that this day she was up to a walk down to the end of our orchard or a ride to nearby Sand Beach and was still enjoying her life with me despite a layered pain management plan and increasing difficulty with her mobility due to arthritis.

I woke up last Thursday and noticed something was off right away. Loolie’s bed was beside mine (she hadn’t been able to sleep with me for months due to her disabilities). She was still in bed and could not get up out of it. I scooped her up and set her down on the floor. She could not move. I figured she was just stiff- the weather was foggy and rainy and that did not help her arthritic joints at all. I carried her outside to the deck where she was able to stand and poop. She looked at me. In my just woken state, it took me a full minute to realize she was using all of her energy to stand up and could not move from her spot. I scooped her up again and took her to a grassy patch to pee. She managed.  I held her next to her water dish and she refused to drink. That had never happened before. I went to prepare her breakfast and she also refused that. Repeatedly. The pain pill, tucked into a ball of cream cheese, was also rebuffed.

Loolie at the Settlement Quarry, her favorite ball field, autumn 2018.

I decided to take her into the shower with me to give her a shampoo. I thought the warm water and the shampoo massage would soothe her legs and solve the problem. Loolie always enjoyed water. Swimming pools, the Lily Pond in Deer Isle, the ocean… She loved swimming out to retrieve a ball. Upon seeing a swimming pool, she’d take a flying leap into it with pure joy and superb athleticism. She always had equal enthusiasm for getting toweled off after a swim or a bath. This day, she was quiet as I wrapped her in several more towels until she was fairly dried off. 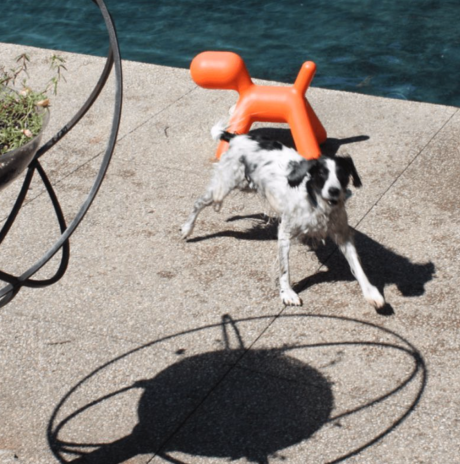 I put her back to her bed and attempted water and food again. No interest. I made my own breakfast and decided to cancel her vet appointment for later that day when she was scheduled to have her nails clipped and I wanted to refill her pain meds, also. I checked on Loolie and saw she was shivering yet her head felt very warm. I put a thick soft blanket around her. I wet my hand and tried to get her to lick off some water. When I called the vet’s office, they advised me to drive her across the bridge to their other office for x-rays, tests, and diagnosis. I told them Loolie had not been able to tolerate long car rides for several months now and I believed the 24 mile trip each way would traumatize her. Instead, I arranged for my dear friend Zuzonna to pick up the pain meds for me later that day. I lay down on the floor by Loolie’s bedside and consoled her for quite some time until eventually I heard her say clearly in my mind, “I want to see my brother.” Startled, I tried to remain calm for my girl, knowing the tears would need to be shed but not yet. As if to make it doubly clear, I heard “Mother. I’m done. I’ve had enough.”

Loolie! You’re here! I’ve been waiting for you ever so long! ! !  (Hershey & Loolie reunion)

I called the vet again. I told them my decision was not to drive Loolie to Blue Hill that day. That she was still unable to walk or drink or eat. I needed them to explain to me how the in-home end process worked. I could not bear to use the “e” word. The vet tech Tracy was very kind and walked me through what I could expect. It was the Thursday before the Passover-Easter weekend and I thought let’s make the appointment for next week sometime. Then I said to Tracy, “It has to be Dr. Plohr. I only want Dr. Plohr to handle my girl.” This is when I found out Dr. Plohr would be retiring the following week. Tonight was the only time I could be sure it would be Dr. Plohr. He would come to my house at 5PM.  I texted Zuzonna to cancel the medicine pick up.  I still had five precious hours to spend with Loolie. I called my dear friend Maureen to let her know to come to say goodbye. Longtime blog readers of goingtogoa.com know that Maureen is the friend who took in Loolie & Hershey for 4.5 months when we first learned Scott was terminally ill and took off two weeks later for India. Maureen was Loolie’s auntie and surrogate mother and most recently, Maureen also helped me create the beautiful Scott Morgan Arts legacy website.

I kept trying to get some water into my girl’s mouth. She adamantly refused. Her shivering had ceased. Zuzonna called me. She was on her way to my house.  She’d put in a prayer asking for guidance to help me with Loolie’s transition. A juvenile bald eagle came out of nowhere and began to fly parallel to her car while she was driving over the causeway. She pulled off the road and managed to get a photo of the big bird as it tilted its left wing and flew out of sight. I said, “Do you remember the story about the eagle on the day my father died?! Today, April 18th, would be my father’s 100th birthday.”  We both got chills. Here is what happened that day:

I was sitting vigil by Dad’s side all of that day. Nearing 11PM, the hospice nurses requested I go to the lobby while they gave Dad a spongebath. My friend Diana called me from a favorite mountain trail hike in LA while I was taking this break. After a few minutes of chit-chat she excitedly reported “Oh my god! An eagle has just swooped over my head and it feels like it is your Dad’s spirit! The nurses are walking down a long hallway now to tell you he has died, Katy.”  I looked toward the corridor to see this playing out exactly as Diana had prophesied just moments beforehand. 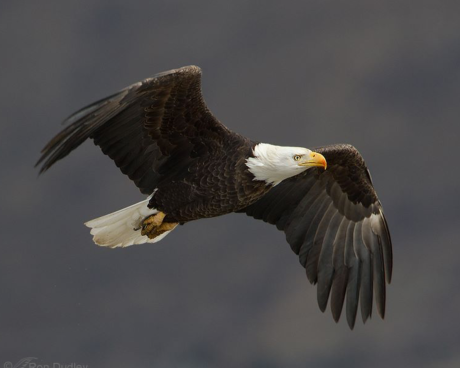 So…the bald eagle, my father’s totem, showed us the way again. I spent an hour with Loolie in my arms seated outside in the fog on a bench on my deck. Her head tilted up under my chin rising now and then to take a big whiff of the salt air. I hugged her close and this is where Zuzonna found me when she arrived. We sat there for awhile until I sensed Loolie was getting chilled. Maureen arrived. I gave Loolie space to say goodbye to her. While I was in the kitchen, Maureen noticed that Loolie was showing signs she could hear me again. I had also noticed this the night before when Loolie’s third special two-legged auntie Susan was visiting us. It seemed a miracle that she could hear again. All the better to hear the I love you’s and the Loolie’s a good girl’s of this day. Treats were accepted and savored from Maureen’s hand. Life-giving water was not. Awhile later, Loolie was standing and I knew how much energy that took for her to do. I knew she wanted to go outside again. I held her in my arms as she surveyed the yard–her yard–one last time. A red squirrel showed up for one last taunt. Loolie acknowledged the squirrel with a slow blink of her eyes. Back inside, Loolie lay comfortably in my arms as I sat in an armchair. Her heart next to my heart.

Dr. Plohr arrived.  Loolie was calmer than any of us. I expressed my gratitude; that he was the one doctor I trusted with my girl for her journey. Bob Plohr said one word: “Karma.” and I could see a tear welling up in his eye. I tried to hold mine back so that Loolie would remain peaceful. Tracy assisted Dr. Plohr and soon Loolie was gone. Some of her white fur and some of her black fur was lovingly cut off for me to keep.

One last detail to consider: which blanket to wrap her in? I saw the soft, washable wool blanket hanging on the ladder nearby. This specially crafted blanket was a gift to Scott from his friends Judith & John of Textillery weavers. They had given it to Scott to comfort and warm him during his final illness in Goa. Scott had kept that blanket wrapped around his shoulders constantly while spending his final months in bed. “Use this one”. The doc and Tracy tucked my girl in, carefully folding the blanket around her. Later it occurred to me it was as if Scott was wrapping his arms around our Little Loolie.

The next day, I got a text from my friend Diana in California. Yes. She had been out hiking again. And yes, there had been a close encounter with a bald eagle. Dad’s eagle.  Loolie’s eagle. My eagle. 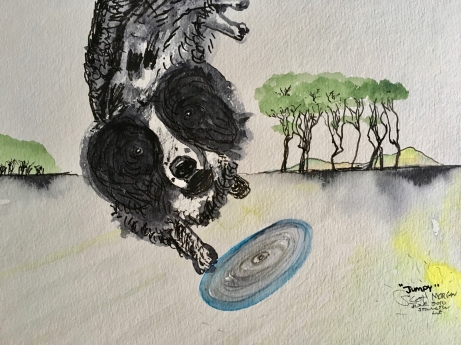 10 thoughts on “loolie leaves with love”