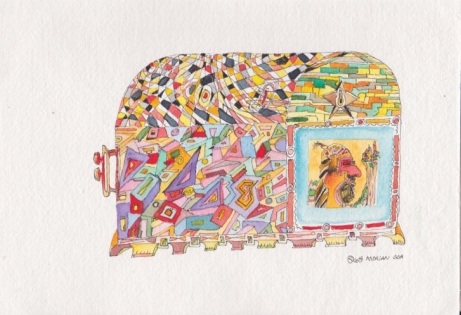 Woohoo! Was a movie day…got the taxi to take us to the Inox theatre to see Django at 9:45AM after a quick breakfast. A masterpiece of filmmaking, Quentin Tarrentino’s latest flick left us breathless. Of course getting up to the 9th row without the wheelchair may also have contributed. As Scott noticed, going back down the stairs is much easier for him. This movie was not for everyone but we both felt it was worth it.

Back at the Marriott we rested in the room for an hour before we were visited by our friend Roberto’s son Alan and his college roommate. These two attend Northwestern University and were traveling to India on Spring Break ( whatever happened to Florida?) and to Goa for another friend’s wedding. Scott and I were delighted to have lunch with these two bright young men. Alan is the carbon copy image of his dad and when I looked at his crinkly eyed smile I could imagine it was Roberto sitting with us. What a treat!

The painting shown here was completed last week using a new palette of watercolors bought at The Art Shoppe in Panjim. Today a package arrived containing some of Scott’s watercolors from home in High Point ( thank you Luis and Bruce for making that happen).