When you are at a hotel long enough, you become familiar with its obvious rhythms and may even notice some of its secrets. Much like Eloise at the Plaza, I have become privy to the hidden wonders here at the Goa Marriott. I know, for example, that there is a family of feral cats with two kittens lurking in the lily hedge by day and sometimes borrowing our chaise lounge on our patio by night. Lest they be mistaken for pests instead of pest control managers, I have spoken to staff on their behalf, even negotiating some daily kitchen scraps as part of their employee benefits. Since their mousing duties require them to work undercover I was not able to photograph my elusive friends. This stock image pic is close, though. 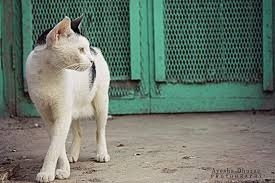 Another thing I’m conscious of is how aware the staff is of us and how protective they have become of me and Scott. I had dinner with our friend Abu when he visited us in Goa last week for two nights. Scott wasn’t up to joining us. I felt lots of eyes wondering who was that man Katy is having dinner with?! And later Abu confirmed the wait staff and security guard had both said something to him in Hindi about how they are watching out for us and taking good care of me and Scott. We are on very friendly terms with the cooks not only because we like them and have been at this venue for two months, but because Scott’s condition requires special dietary needs be met and the staff has been extremely flexible with us. The chefs and support staff at the Marriott are all topnotch and their individual and collective concern for Scott has been truly heartwarming.