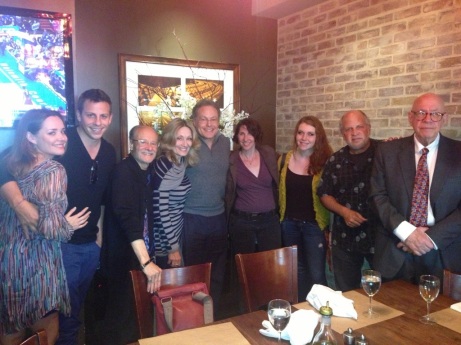 Have you ever been to one of Scott’s famous impromptu lunch or dinners? He likes nothing better than to gather up the troops and have a meal together at some interesting restaurant or at home. Often the people at those intimate parties do not know each other but walk away with new friends. Back in December we met and quicly befriended Matt Mazzeo at the Sur La Mer Resort in Goa. On discovering he lived in Los Angeles, Scott’s bright blue eyes lit up and he enlisted Matt to put together one of these lunches. Matt sent Scott numerous emails with fun photos as he traveled throughout India but as soon as he got back home he began the task of coordinating invitations to several of Scott’s LA friends ( not easy to get busy people together in the City of Angels!).

The lunch was held Saturday January 26th at the private dining room in Century City’s Toscanova restaurant. We heard this morning from Don Behrstock– longtime friend and furniture biz colleague– that Matt did an incredible job and everyone had fun swapping Scott stories. Jac & Carol Stulberg were of big help in following up with everyone. Scott ‘s much loved niece Mercedes took time out from her intensive studies at USC film school to be there representing his family along with Alison Morgan. Another furniture industry friend, Tony De Fazio drove all the way up from San Diego to be there and brought surprise guest Charles ” Seemore” Simmons with him. Seemore is our dear friend from High Point, North Carolina that is like a favorite uncle in our home. Rumor has it he may even be planning on going to goa to come see us soon.

A big shout out to Matt and everyone who was there at Toscanova! You created a wonderful tribute to Scott that we will always cherish. That’s what friends are for.