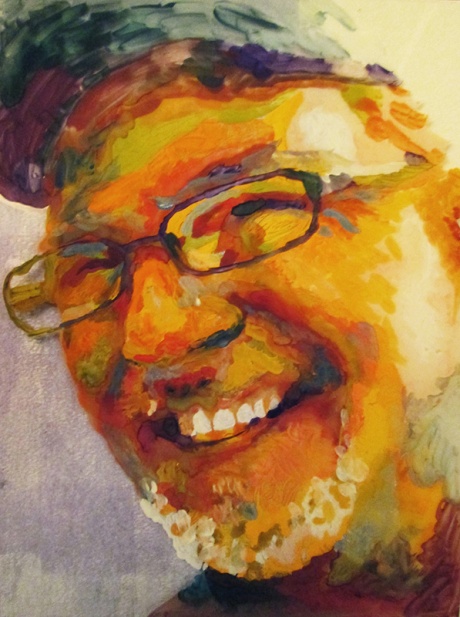 Scott recognized talent when he came across it. Whether it was the unfettered (and untrained) genius of an Uzbek tribal woman creating an embroidered suzani for her wedding day, the meticulous precision of Carlo Scarpa’s architecture, or the centuries-old paintings by his favorite Italian and Dutch masters…Scott recognized and appreciated fine art, fine craft, and fine design with his own talented eye. For most of his life he nurtured his secret artist’s soul by drinking in fine art at museums and galleries and contemporary art shows around the globe. He found ways to surround himself with art and artists even as he roamed the world in the guise of a furniture business executive. He said my life is a collection… He collected beautiful objets d’art and supported many of the local artisans on Deer Isle where he resided in summer, always preferring to help someone who made something by hand rather than purchasing a mass-produced item.

Although Scott had been creating art work all of his life most people did not know he had painted thousands of watercolors over the years, many of them handed out freely to friends and strangers alike, the rest hung in obscure powder rooms in his home or hidden away in flat file drawers where nobody ever saw them.  He was not treated as a serious artist because he had yet to treat himself as a serious artist. In this past year self-confidence blossomed within his cancer-riddled body even as his flesh visibly withered and let him down. There was no time to waste. The more than two hundred watercolor paintings that Scott produced during his last year of life under daunting physical circumstances are the works of a mature artist mastering his chosen medium, the crowning achievement being the book GOING TO GOA|the paintings of scott morgan. As he came into his own mastery and joy of knowing he was achieving his dream of not only being an artist but being recognized as an artist, Scott took it further and during his final year of life his example became a message of inspiration to all aspiring artists, designers, and dreamers. 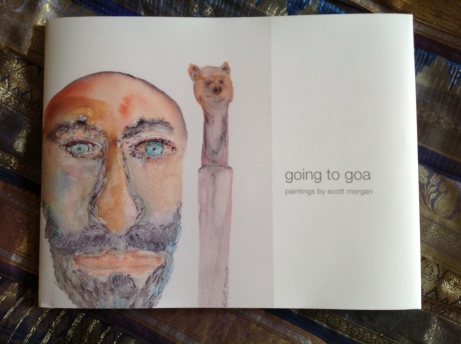 The proof of the impact that his life was having on others first came as we were waiting in the passenger lounge to board the plane to Tokyo on our way to India. An email came in telling us that a group of his furniture industry designers and friends had set up the Scott Morgan Design Scholarship in his honor utilizing Scott’s idea that successful designers should mentor up-and-comers within the actual industry.  The second piece of proof came when a high school art teacher named Lisa Sterling in Greensboro, NC decided to inspire the next generation of artists  by having her students follow Scott’s trip of a lifetime on our going to goa blog and create art using Scott’s own experimental techniques of painting art in the dark. The class was written up in the local newspaper as a result and we were visited in Goa by a young couple that had a direct connection to this classroom as well. There were a myriad of other artists inspired by Scott’s Going To Goa…some unknown like a childhood friend of mine who wrote and recorded a song called I Can Hear You Paint, and some well-known like Scott’s best friend from High School days in India, the painter Dan Rizzie. And now, with the delivery to me of a project that Scott believed in on kickstarter.com I know that there is another very talented artist that was influenced by Scott, too. His name is Brian Foo and his project is a book that he wrote and illustrated with his own watercolor paintings called Continuous City. 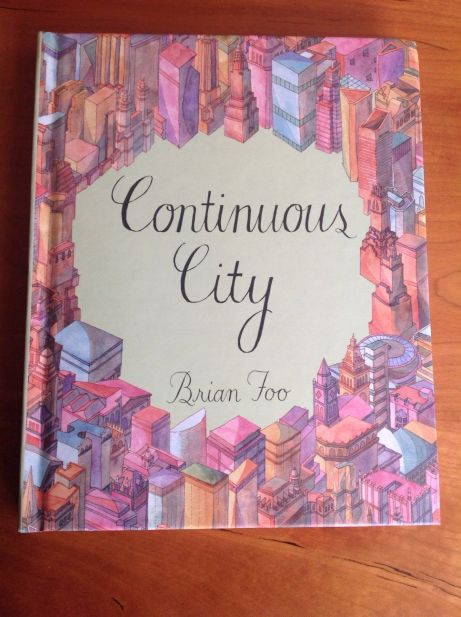 From his confinement in bed at the Marriott Hotel in Panjim, Goa, India, Scott reached out to the world. He discovered Brian’s work on kickstarter and decided to join the crowdsourced funding for Brian’s project with a donation. His sponsorship entitled him to receive some original paintings of favorite buildings from any city in the world. Scott chose Venice, Italy and we both sent Brian descriptions of why Venice was so special to both of us individually and as a couple. From these emails Brian was able to capture the spirit of Venice for us…paintings of the Bridge of Sighs, Ca’ d’Oro , Academia and others were rolled up and sent to Goa just in time for Scott to see a week or so before he died. They were also published as an addendum to a special edition of the Continuous City book. Yesterday I received our copy of the book Continuous City with Brian’s inscription to Scott inside: 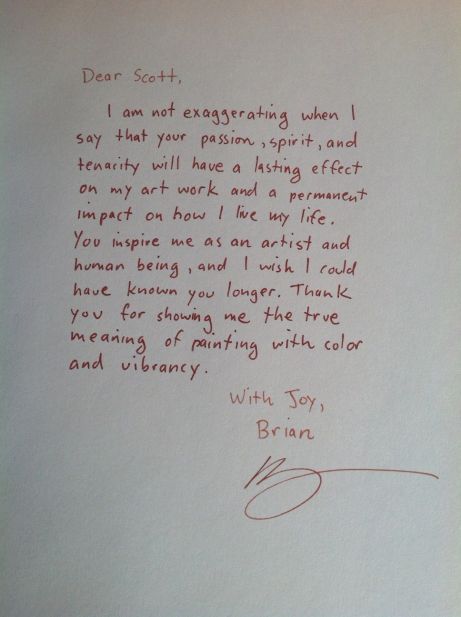 Brian Foo lives in New York City and never met Scott in person, only through the blog and direct emails artist-to-artist. I was expecting the book and a few other items related to the Kickstarter level Scott had donated. Scott knew he might never see the book and had told me that it would be a gift from him to me “after I am gone to remind you of me and our trip to Venice.” Enclosed with the book was something I was not expecting and was not part of the original plan. On his own and inspired beyond the obligation of his commission from Scott,  Brian generously gave me an original 9″ x 12″ watercolor portrait he made of Scott. He also framed it.

It’s the image at the top of this blog post. This portrait is so filled with joy and light it made me gasp with delight when I first saw it and I smile now every time I look at it. I think Brian captured Scott’s essence perfectly, don’t you? To read more about Brian Foo see this article here or visit his project specific website Continuous City website or his website BrianFoo.com. And stay tuned…I will share Brian’s paintings of Venice as well as the beautiful story he wrote to accompany it in a future blog post.